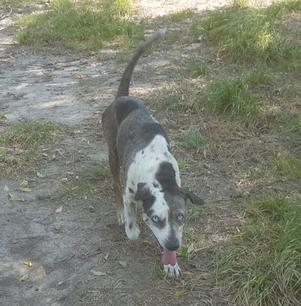 Catahoulas are highly intelligent and energetic. They are assertive but not aggressive by nature.  Catahoulas in general are very even tempered.  Catahoulas are very serious about their job if they are working dogs.  They make a good family dog but will not tolerate being isolated, so interaction with the dog is a daily requirement.  When a Catahoula is raised with children, the dog believes that it is his or her responsibility to look after and protect those children.  Many owners will say that the Catahoula owns them and they can be insistent when it's time to eat or do other activities.  Catahoulas are protective and a natural alarm dog.  They will alert one to anything out of the ordinary.  Befitting their heritage as herding and driving dogs, Catahoulas can be wary of strangers.  They're protective of their families and opinionated about who is and isn't trustworthy.  People who live with them say they're excellent judges of character.  They have a single coat and cannot tolerate the cold.

Hunting
These dogs are outstanding bay dogs, tracking, and hunting dogs. They have been known to track animals from miles away, and have been used for hunting feral pigs, squirrel, deer, raccoon, mountain lion, and black bear.  They often track silently and only begin to make their distinctive baying bark, eye to eye with the prey, once it is stopped, and hold it in position without touching the animal; using only posture, eye contact, and lateral shifts.

Herding
They are used primarily for herding cattle and pigs by a method of antagonizing and intimidation of herd animals as opposed to the method of all-day boundary patrol and restricting the animals being herded from entering or leaving the designated area.

Our first Catahoula was a mix.  Her name is Tigeress, but we call her "Puppy Girl".  We were blessed to add her to our family in 2005.  We loved her so much, we decided to add a couple more to our family.

In 2007, we added two Registered Louisiana Catahoula Leopard Dogs to our family- Precious, our breeding female, and George, our breeding male.  They are out of the Wright Line and is the largest line of Catahoulas, at 90 to 110 pounds, and was developed by Mr. Preston Wright.  George was a natural bobtail and we had 50% bobtail pups!

We love this breed for its protection and guarding ability.  Our dogs kept predators off our property, flushed cattle out of brush and creeks, and harassed our bull when he ran away (he was over a mile away) until he ran home.  The dogs put him back in his pen.

I stopped breeding these dogs when I was going through my divorce in 2009, but I have had so many people contact me over the years requesting my dogs and puppies.  So I will begin breeding again in late fall 2020.

Catahoulas are fearless and will lay down their life for yours.  I can't even tell you how many times I have had to stitch, staple, and glue my dogs back together.  If you have a weak stomach, DON'T scroll down to the end of this page.  I have pictures of my dogs after encounters with coyotes, hogs, and other confrontations.

We lost George June 2, 2016.  He was hit by a car.  He had an extreme fear of storms and a really bad storm came through the night before.  I had him in the pen, but not chained.  He jumped our 5' fence and ran to the highway...

​My beautiful dog, Precious, crossed over the Rainbow Bridge on Monday, July 23, 2018.  I held her in my arms as she left this world.  She will be forever missed...

My babies after confrontations with unwanted wildlife.  Yes.  They lived! 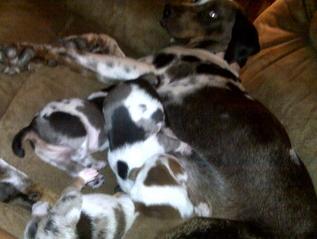 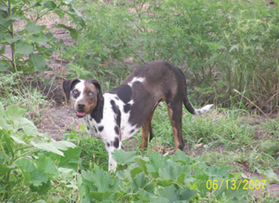 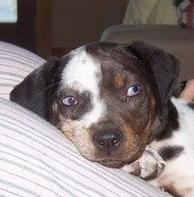 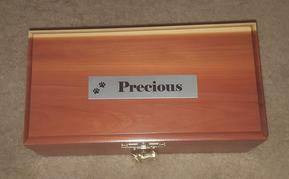 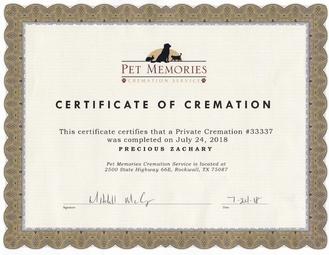