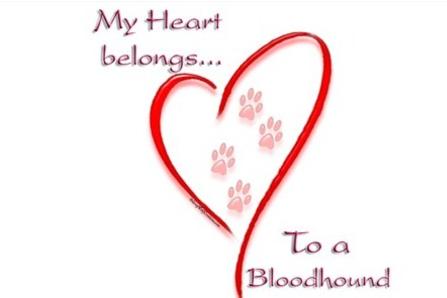 The Bloodhound’s ancestors were created in medieval France to trail deer and boar. Today, he’s a highly active and intelligent dog breed whose keen sense of smell has found him a special place in law enforcement and search and rescue. His fans love him for his sweet nature and unique appearance.

My husband always wanted a Bloodhound ever since he was a child.  He is the type of person that would never spend money on a dog for himself.  So I searched and searched.  They aren't easy to find.  I would find some, then call, and they were already sold.  Finally, after about 6 weeks, and missing out on at least 4 litters that sold out, I found one!!  I purchased "Walt" about 8 minutes after he was listed.  Within 15 minutes I had my deposit on him and would pick him up the next day.  All done on my phone, without a phone call (by Facebook and texting), with my husband sitting by my side!  I did it!!

I purchased his boyhood dream dog.  A black and tan.  Just what he always wanted.  Call it an early birthday present, Christmas present or 1st anniversary present.  He was getting his dog!!

The deception...."Honey, I have to work late tonight..." and off I went, leaving EARLY from work so I could complete my 3 hour drive there and 4 hour drive home.  I was soooo excited!  I had the cash in hand that I had saved to purchase this pup, but I didn't have a cage or even a towel in my car in case he peed on me.​  I got there just before dark. I really didn't know anything about this breed except what I read online.  I don't think I had ever even seen a Bloodhound in person before.

They were keeping all 12 pups in the house at the time, quarantined in the kitchen so they wouldn't destroy the rest of the house.  Oh!!  I wanted a girl so bad!  How cute!!  And the liver color...no...stay the course...I am here for a black and tan little boy...And I picked "Walt".  Of course, that wasn't his name when I picked him.  I wanted to name him "Copper" after the Disney movie, "The Fox and the Hound".

I knew I couldn't just walk in the house.  Don had the front porch lights on and he would see the pup right away.  So I left him on the front porch, walked in with my computer bag, gave Don a kiss, then turned off the lights.  "Oh, I forgot my purse." I said as I walked back outside to grab the pup.  He was gone.  He ran down the porch towards the car.  I grabbed him and headed back in the house.

Don's chair is right in front of the TV next to the couch.  If you open the door and he's looking at the TV, not the door, I could get in without being noticed.  I opened the door and my son, Josh, was standing there in the hallway.  BUSTED!!  He opened his mouth and I covered my lips motioning him to be quiet.  I dropped the pup in Don's lap over the chair and kissed him on the head.  "Happy Birthday and Merry Christmas, Baby!!"  He couldn't believe it!!!  He was so happy!!

Don didn't like the name, "Copper", but somehow, "Walt" stuck (Walt Disney).  He is Don's side kick and goes almost EVERYWHERE with him.

We've had a couple scares.  In 2016, Walt was playing with our Anatolian Shepherd, Maxie, and got twisted up in the chain.  He choked.  His lungs filled with fluid and we could have lost him.  We stayed with him at the vet's office for 2 days providing care for him every minute.  Then in 2018 he hurt his paw and needed surgery.

Yes.  It looks like he sleeps all the time, but don't let that fool you!!

I put a $200 deposit on a female Bloodhound puppy a year before she was born.

Bella is AKC registered and will be trained in obedience, Man Trailing (Search & Rescue), Therapy, and as service dog.

She was never as small as Walt from the very beginning.  She was 60 pounds at 4 months.  She was 98 pounds at 1 year old.  She talks a lot and complains even more!  I love her very much and am looking forward to our adventures together.

We rescued Cooper on Monday, September 3, 2018.  He's probably between 3 - 5 years old.  He'd been living tied to a tree, pretty much starving, sitting next to an open sewer line.  He was covered in flies and had open sores.

He was bathed, wormed, treated for fleas, ticks and mites. His ears were cleaned. He got his yearly shots. He had several good meals, eating up to 10,000 calories per day.  He put on 25 lbs in a month and weighs in just about 95 lbs.

He got his rabies shot, heartworm tested (neg!), monthly heartworm preventive, and he get fixed.  We will start on basic obedience and commands.  He's a beautiful dog and is a wonderful addition to our family. 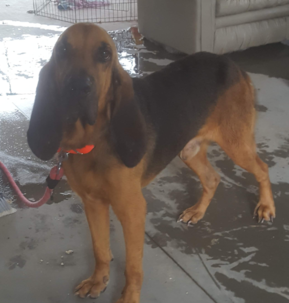 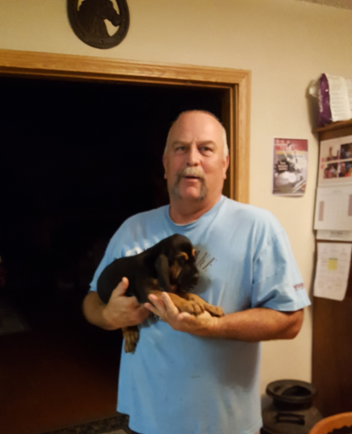 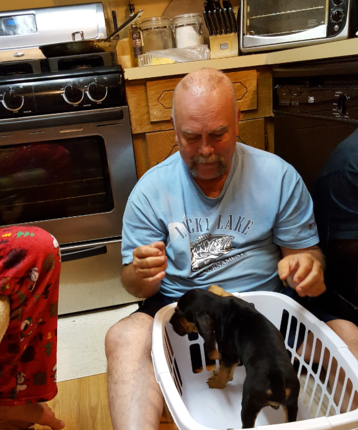 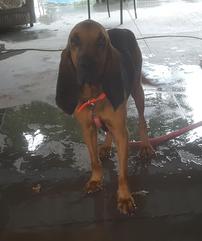